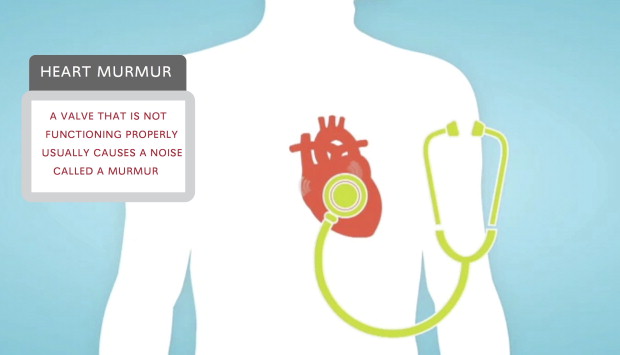 Heart murmurs are the sounds that are produced due to turbulent blood flow. If something interferes with the normal flow of blood, audible noise, which can’t be ignored, may be detected.

Heart murmurs can be acquired, congenital or functional.
Congenital heart murmurs are ones caused by some congenital heart disease. Often, they are detected at birth or in the first months of life (sometimes a few years later). Such noises are often caused not by an inflammatory process, they are likely to be a sign that the heart is not properly formed.
Acquired heart murmurs may appear because of the bygone rheumatic diseases that cause inflammation of the valves and leave scars, which hinders the normal blood flow. Also, murmur may be audible in the heart of aortic stenosis or trunk vessels (large vessels branching from the ventricles).
Between beat while the heart muscle “relief” – diastolic murmurs occur. Respectively a systolic murmur occurs while heart muscle is in tension. Systolic murmurs have special gradation by intensity. It ranges from one to six. So 1/6 means weak, faint, almost inaudible murmurs. The 6/6 one is so loud that can be heard through a stethoscope slightly removed from the chest.