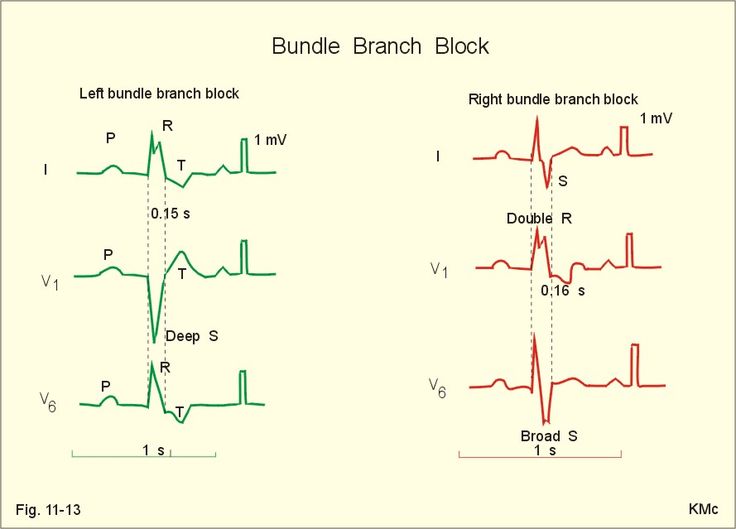 What is the bundle branch block condition?

Our organisms are the most fantastic machines in the world. We work without any control and with high complicity and productivity. Our hearts need no chronometer to make the required rhythm, we have a pacemaker given by the nature. It is placed in the right upper chamber (right atrium) of the heart. This specialized cells emit an electrical impact. In different heart hey work in a different way, still it’s somewhere between 60 and 100 impacts a minute. The impulse even has a certain route to go through the heart which contracts after it. First it passes atria, then by the special crossing goes to the lower chambers. This crossing can but be mentioned. It is so called A-V node, which is also a cell group, passing them, the impulse takes the way called bundle of His (hiss). The bundle separates into the right and the left one.
Respectively they lead to the left and the right ventricles of the heart. In fact it’s quite similar to the traffic on the roads, but with the erythrocytes instead of cars.

What is bundle branch block?

Here the problem begins. The electric impulse, normally, descends by the two ways at the same time, which means that the ventricles contracts simultaneously, as well. And then one of the branches get blocked. Therefore the impact goes by another road, therefore it happens later. For a second only, and still it’s the bypass variant only. So the other lower chamber contracts later. Usually, a person with the bundle branch block won’t notice any symptoms if everything else in the heart works fine. But with the help of the electrocardiogram (E.K.G.) the electrical impulses can be written down, thus any abnormality will be figured out.
If you are a bearer of the disease, you need to be examined by EKG. Showing no trouble, the bundle may be blocked. And thus some part of heart won’t be getting enough blood, thus, enough oxygen. That means you have to see your physician regularly to exclude the possibility of deterioration. Check-ups are vitally important, even if for many years nothing will change for the worse.