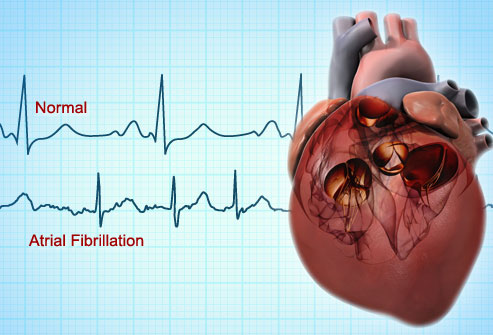 What is atrial fibrillation?

Over 2 million of Americans suffer from atrial fibrillation. It’s characterized by forming of blood clots and the atria tremble instead actual beating. Thus, blood stagnates in the chambers pooling and clotting without changing. If those clots leave heart and flow through artery in the brain, happens a stroke (brain attack). The atrial fibrillation is the main cause of the strokes.

Thus, it is extremely important to treat it to prevent them. So there is even a special organization – the American Heart Association. They offer an aggressive fight to the atrial fibrillation. According to them, a patient is treated by the physician using the preventive medication. By now it’s aspirin and warfarin that struggle the disease in USA.

In fact, treating strokes caused by blood clots doctors can tell exactly which drug is superior. No doubt warfarin is more effective, still it has different side effects, they are bleeding problems or ulcer, especially among elderly people. Those, elder than 75, must be checked especially diligently. But assuming that the doses are done correctly and the regime is watched strictly, the pill will be safe and will work out well. Unless there’s no contradictions, of course.

Especially if the risk for stroke is high, no way it can be aspirin, warfarin only.